Two of China?ˉs largest banks, Industrial & Commercial Bank of China Ltd. and China Construction Bank Corp., are testing their regulator?ˉs tolerance by protecting profits at the expense of bad-loan buffers.
ICBC and Construction Bank both reported loan-loss coverage ratios below a regulatory minimum of 150 percent of existing nonperforming loans when they disclosed third-quarter earnings.
So far, China?ˉs lenders haven?ˉt faced any substantial penalties for letting the buffers slip as they ?°scramble?± to maintain profits in the face of increased levels of undesirable loans, according to Chen Shujin, a Hong Kong-based bank analyst at DBS Vickers Ltd.
If the banking regulator pressed ICBC, the most persistent offender, to quickly get its ratio back up to 150 percent, the lender might need to step up disposals of negative debt and could face a big hit to profit. No comment was immediately available from the China Banking Regulatory Commission on Friday.
While the banking regulator has been “tolerant” of breaches of the requirements, which are high by global standards, banks may be forced to conform after grace periods, Chen said.
In a sign of the pressure on lenders, the combined profit of China’s five largest banks rose 0.8 percent in the third quarter from a year earlier, the smallest gain in three quarters.
ICBC’s coverage ratio stands at 136.1 percent, while Construction Bank’s is 148.8 percent. Bank of China Ltd. has clambered back above 150 percent and Agricultural Bank of China Ltd., the fourth of the nation’s big banks, is also above that level. 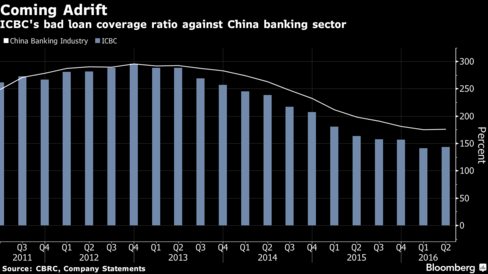 The banking regulator has resisted lobbying by the big lenders to lower the minimum ratio, people with knowledge of the matter said in July. The CBRC instead urged banks to take steps to restore their buffers, said the people, who asked not to be named discussing private information.
Point Scoring
ICBC’s breaches this year prompted the central bank to deduct points from its metrics under the so-called Macro Prudential Assessment framework, a measure of the health of Chinese banks, Caixin reported this month.
The CBRC can take more serious action. Suspending branch openings and some of a bank’s operations, requiring changes in management, and limiting dividend payouts and asset sales are all options when a lender leaves the coverage ratio below 150 percent for more than six months.
More than a decade of profit growth at Chinese banks is threatened by slowing growth and an accompanying rise in nonperforming loans, hurting their ability to return money to shareholders.
A bad-loan coverage ratio of about 120 percent to 130 percent would be “reasonable” and “possible,” the chairman of Construction Bank, Wang Hongzhang said in April. Bank of China argued around the same time that China’s bad-loan buffers compared with an average of about 79 percent for global systemically-important banks.
Email ThisBlogThis!Share to TwitterShare to FacebookShare to Pinterest
Newer Post Older Post Home